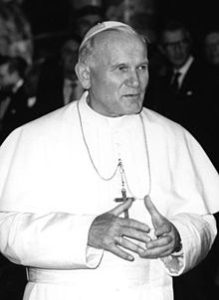 “We must build a culture of life and fight the culture of death.” It is a battle cry that has echoed throughout the Church of the last half century. Yet, for many of us, we are not engaged in the battle because we mistakenly think we understand what these culture labels mean. Those who speak of a culture of life often do so in wholly negative terms—in speaking of what we are opposed to. For example, we define it as a culture that lies in opposition to abortion, or euthanasia, etc. But even if these crimes against human life were to end tomorrow, we would still be haunted by a culture of death. Instead, we need a more positive definition like the one Pope St. John Paul II gave when he said:

“[T]he culture of life means respect for nature and protection of God’s work of creation. In a special way, it means respect for human life from the first moment of conception until its natural end” (John Paul II, Closing Address World Youth Day 1993).

Initially, it might strike us as odd that the Pope mentions a respect for nature as being a key aspect of a culture of life. This is a recurring theme in the writings of Pope Benedict and Pope Francis as well, as they speak of a human ecology and its connection to a culture of life. Respect for nature does not only (or even primarily) refer to things like trees, rivers, and cute little bunnies, although it includes them. Instead, it refers to respecting the nature of things and using them in the manner that God intended when He created them. Most importantly, this includes a proper use of our own human nature in a way that leads to genuine happiness.

What is a Culture of Life?

Respecting human nature also means that we must also be clear about what we mean when we use the term life. For human beings, life has two dimensions—the material and the spiritual. Both are important, but because it is eternal, our spiritual life has a necessary precedence, so much so that our life on earth is at the service of eternal life. All too often we refer to life only in the temporal sense. But when a Christian seeks to promote the culture of life he is not only looking to life as the corporal existence prior to death, but means eternal life as well. This is a point that John Paul II captures well at the opening of Evangelium Vitae. He emphasizes that when we use the term life we are referring to that:

“…which far exceeds the dimensions of man’s earthly existence, because it consists in sharing the very life of God. The loftiness of this supernatural vocation reveals the greatness and the inestimable value of human life even in its temporal phase. Life in time, in fact, is the fundamental condition, the initial stage and an integral part of the entire unified process of human existence. It is a process which, unexpectedly and undeservedly, is enlightened by the promise and renewed by the gift of divine life, which will reach its full realization in eternity (cf. 1 Jn 3:1-2). At the same time, it is precisely this supernatural calling which highlights the relative character of each individual’s earthly life. After all, life on earth is not an “ultimate” but a “penultimate” reality; even so, it remains a sacred reality entrusted to us, to be preserved with a sense of responsibility and brought to perfection in love and in the gift of ourselves to God and to our brothers and sisters.” (EV, 2)

Practically speaking what this means is that when we seek to protect and promote the sacredness of life in opposing something such as abortion, we not only care about the child in the womb but also the eternal destiny of his mother, the abortionist, and even the annoying “escorts” whose sole job it appears is to mock those praying outside the abortion clinic. It may very well be that their lives are in greater jeopardy than the child that they have thoughtlessly snuffed out.

A Culture of Death

On the other hand, the culture of death is often defined by its fruits in society such as abortion, euthanasia, the death penalty, and genocide. But even if, as I said above, these things were outlawed tomorrow the culture of death would still go on. That is because at the heart of the culture of death is the fact that it is designed to lead to spiritual death. These acts against human life are merely fruits of a wicked tree. If we are to truly fight for a Culture of Life then we must attack the Culture of Death at its roots—a strategy that the Late Pontiff well understood:

In seeking the deepest roots of the struggle between the “culture of life” and the “culture of death”, we …have to go to the heart of the tragedy being experienced by modern man: the eclipse of the sense of God and of man, typical of a social and cultural climate dominated by secularism, which, with its ubiquitous tentacles, succeeds at times in putting Christian communities themselves to the test” (Evangelium Vitae, 2).

Because these tentacles have grasped so much of our culture, the only way to stop them is to attack them at their roots. With this in mind, John Paul II takes a sober look at three roots in particular in Evangelium Vitae. Not satisfied with simply pointing out the problems, he also offers three key themes from his pontificate as antidotes. In each of the next three entries, we will look at one of the roots as well as an antidote for destroying its hold.