Home
Wind & Flame
A Story Can Transform Your Life: The First Friday Devotion

Sometimes something as simple as a story can transform your life. Though I can’t recall how I came across (then seminarian, now priest in the Diocese of Raleigh) Fr. Philip Johnson’s story about the First Friday devotion, I won’t soon forget the details of it because that story changed my life. 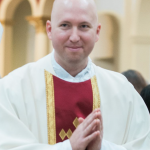 The story which Fr. Johnson told was really a retelling of an event which happened to Fr. Jorge Garcia on December 14, 2009. On that date, Fr. Garcia was a new priest, having just been ordained 60 hours prior. He was headed down a mountain in a car in the rain on his way back to Rome. Through a series of providential circumstances, Fr. Garcia was led to a dying young motorcyclist, Roseanna, on the roadside. In her final moments, he gave Roseanna absolution. 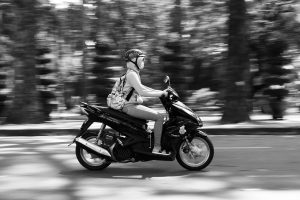 Images drew up in my mind as I listened to the description of the accident scene. I envisioned the twisted bike and the 17-year-old’s broken body lying still on the ground as rain fell from the night sky. I pictured the moment she signaled her desire to receive absolution and what she looked like falling limp in Father’s arms not long afterwards. But what made the greatest impression on me was the conversation Fr. Garcia had with the accident victim’s family.

Fr. Garcia, so new to the priesthood, was thrust directly into the roles of confessor, counselor and comforter all in the course of a day. He had to break the devastating news to the young woman’s mother. Finding a phone number in the girl’s cell phone, he made the call.

Then, after hearing the details of the tragedy and how her daughter had died in the arms of a priest, Roseanna’s mother told Fr. Garcia of her daughter’s devotion to the Sacred Heart of Jesus. She said that the girl had completed the First Friday Novena twice. Because of that devotion, she said, it was clear that Jesus had fulfilled His 12th promise.

“I promise thee in the excessive mercy of My Heart that My all-powerful love will grant to all those who communicate on the First Friday in nine consecutive months, the grace of final penitence; they shall not die in My disgrace nor without receiving the Sacraments; My Divine heart shall be their safe refuge in this last moment.”

Prior to hearing Fr. Johnson’s presentation of this real life story, I was ignorant of the power and importance of the First Friday Novena.

As Monsignor John Williams once noted, the true meaning of First Friday has largely been overshadowed (if not outright hijacked) by our materialistic culture. Case in point, googling First Friday in Raleigh, I found all manner of First Friday advertisements for everything from $4 craft brew specials and a free ice cream cone to art exhibits and free music performances. There wasn’t a single link for First Friday Mass times or devotion instructions.

Though I found daily Mass times by engaging in a deliberate search of parish websites, I didn’t find any specific listings for the devotion. Therefore, it’s not surprising that First Friday Masses are, in general, not well attended. In other words, the cultural promotion of First Fridays as nothing more than a day for consumer deals has undoubtedly succeeded in dominating the conversation and confusing the average American Catholic (me included.) 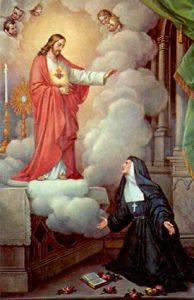 From 1673-1675, Sr. Margaret Mary Alacoque, of the Order of the Visitation, had several visions of our Lord. In them, Jesus revealed to the nun His Sacred Heart and said, “My divine Heart is so inflamed with love for mankind…that it can no longer contain within itself the flames of its burning charity -and must spread them abroad by your means.”

Sr. Margaret Mary Alacoque explained that Christ’s inflamed heart was surrounded by a crown of thorns which represented man’s sinfulness and ingratitude. In reparation for these grievous offenses, Jesus told her to establish devotion to His Sacred Heart by means of the Nine Fridays, or First Fridays, practice. Additionally, He requested the establishment of a feast of reparation to be celebrated on the Friday after the octave of Corpus Christi.

To those who fulfill His request, Jesus made twelve promises.

1. I will give them all the graces necessary for their state of life.
2. I will give peace in their families.
3. I will console them in all their troubles.
4. I will be their refuge in life and especially in death.
5. I will abundantly bless all their undertakings.
6. Sinners shall find in my Heart the source and infinite ocean of mercy.
7. Tepid souls shall become fervent.
8. Fervent souls shall rise speedily to great perfection.
9. I will bless those places wherein the image of my Sacred Heart shall be exposed and venerated.
10. I will give to priests the power to touch the most hardened hearts.
11. Persons who propagate this devotion shall have their names eternally written in my Heart.
12. In the excess of the mercy of my heart, I promise you that my all powerful love will grant to all those who will receive Communion on the First Fridays, for nine consecutive months, the grace of final repentance: they will not die in my displeasure, nor without receiving the sacraments; and my Heart will be their secure refuge in that last hour.

Fr. Johnson’s narrative made manifest the power of the First Friday devotion. It inspired me to follow Roseanna’s example in fulfilling Jesus’s request. In turn, I’m teaching my children the importance of this beautiful novena.

Indeed, a story can transform a person’s perspective and stimulate action. Let’s reclaim the cultural conversation when it comes to the start of each month. Rather than proclaim the promises of commercial deals, spread the good news that First Fridays belong to the Sacred Heart and that Jesus’s 12 promises hold eternal value.

There are First Friday Devotions celebrated throughout the Triangle. Find one nearest to you. Remember to call the parish directly, in advance, to confirm the Mass times.

Does your parish offer First Friday services? If so, share that information with fellow Catholics and invite someone new to join in. Let us know, so that we can add it to the IBT calendar.