Queen of Heaven: Mary’s Battle for You (Reina del Cielo)

In keeping with that goal and just in time for the 100th anniversary of Our Lady of Fatima, Saint Benedict Press has released Queen of Heaven: Mary’s Battle for You (Reina del Cielo).

The video series examines the Woman who said “Yes” vs. the Angel who said “No.”

Viewers embark on a journey that chronicles the life of the Mother of God, beginning before the dawn of time and extending to the present day. Catholic teaching, biblical commentary, private revelation, and the Marian apparitions at Guadalupe, Lourdes, and Fatima are threaded together into a biography of the most famous woman in history.

Now Saint Benedict brings us Queen of Heaven: Mary’s Battle for You, an even more vivid, moving, and insightful look into one of the principal tenets of the Catholic faith. –Brad Miner on The Catholic Thing

These Catholic experts reveal the maternal care Mary has given to humanity and the battle she has waged against the evil one. Viewers of this series will, no doubt, grow closer to Mary as they discover the woman who, from the very beginning, was destined to be the Queen of Heaven.

Bibles, Books, Gifts and So Much More

Giveaway & How to Enter 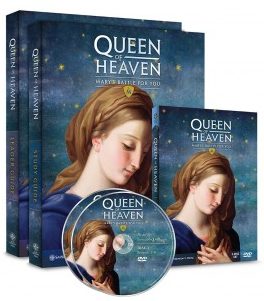 One winner will receive a DVD set of Queen of Heaven: Mary’s Battle for You, 1 Leader Guide,  and 1 Study Guide! The value of the prize is approximately $120.

Details: Winner will be selected at random on Sat, Apr 29th at the Speaker Series in Greenville and announced on the IBT Facebook Page. The DVD set & guides will be shipped (free) to the winner if not present at the drawing.