Each time I see a bumper sticker or a roadside sign prompting me to “keep Christ in Christmas,” I can’t help but wonder how effective this campaign is. Truth be told, it isn’t even clear who the intended audience is. Are the organizers talking to me and my fellow Christians or are their admonitions directed to our secular counterparts? I suspect that it does little more than paint Christians as mulish, demanding that everyone share their religious convictions.

From an American perspective, Christmas has always been a secular holiday. As each of the various Christian sects came to their respective colonies, they brought their Christmas traditions (or lack thereof in the case of the Puritans) with them. As the new country was formed there was a concerted effort to bridge the gap by creating a sort of eclectic Christmas celebration with its central element being the family get-together with gifting and not so much Christ’s birth.

Witness two literary examples. Washington Irving wrote a short story on Christmas at the Bracebridge estate. The celebration consisted of a feast of fellowship with the family and their landed tenants. The focus is solely on the secular aspects of Christmas with no mention of any of the religious elements. The influential Charles Dickens cites Irving as formative to his own Christmas writings, foremost amongst which is A Christmas Carol. The classic portrays Scrooge as redeemed by the three spirits of Christmas rather than Christ.

Second is Clement Moore’s The Night Before Christmas which adds the appearance of the gift-bearing St. Nick. Loosely tied to the historical St. Nicholas, the patron saint of children, Moore’s character ensured that the secular Christmas would be primarily a gift-giving children’s holiday.

Neither of these examples show that the secular Christmas was hostile to religious elements. They simply de-emphasized the religious meaning of Christmas. This should not be interpreted to mean that it hasn’t also been a religious holiday. Looked at properly, it has been both at the same time. The secular emphasized gift giving and family time, while the religious celebrated the birth in time of the Eternal Son of God—Emmanuel, God with us. 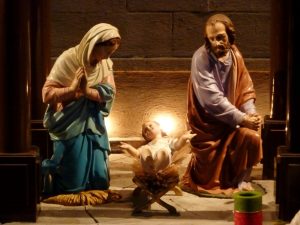 Although there is no inherent conflict between the two Christmases, they cannot exist side by side as equals. While not necessarily hostile to the religious, the secular Christmas is susceptible to consumerism, ultimately making it antithetical to the religious. The religious must always come first—“seek first the Kingdom of God and all these things shall be added.”

Keeping the Mass in Christmas

Thomist philosopher Josef Pieper wrote a short book called In Tune with the World in which he develops a philosophy of festivity which can be helpful for us to develop a plan of action. He reminds us that holidays should not be simply days that mark events in the past because “strictly speaking, the past cannot be celebrated festively unless the celebrant community still draws glory and exaltation from that past, not merely as reflected history, but by virtue of a historical reality still operative in the present.” In other words, it is only when the historical event has power today that it can be remembered in a holiday.

This is why we must keep the Mass in Christmas(s)—only in the Mass is the historical reality of the Incarnation made actually operative in the present. The same Christ, who by the power of the Holy Spirit was brought into the womb of Mary, is brought by that same Spirit into the womb of the Church in the Eucharist. The Mass is at the center of Christmas because only there is the Incarnation protected from becoming just a historical event of the past.

In parishes across the world, millions of fallen-away Catholics will return to Mass this weekend. They will go because they sense the connection between the Mass and the Incarnation, even though they may not be able to articulate it. They will only return the week after if they sense the connection between us and Christ. Be patient and charitable to the “Christmas Catholics” and go out of your way to make them welcome. Show them what joy there is in meeting Our Lord in the Eucharist.

Pieper also warns that Christmas is always in danger of becoming an absurdity. He says that “if the Incarnation of God is no longer understood as an event that directly concerns the present lives of men, it becomes impossible, even absurd, to celebrate Christmas festively.” In other words, it is preposterous to pontificate on “Keeping Christ in Christmas” when Christ is not Lord all the other days of the year. If the Incarnation is not something that touches someone’s life personally, then, of course, they will not see Christmas properly. Christmas becomes one of the many celebrations of the “Holiday Season.”

Christmas will become completely secularized unless we preach the Gospel and present Christ as a gift to be loved and enjoyed. To put our foot down and insist that people say “Merry Christmas” instead of “Happy Holidays” misses the point entirely. When we wish someone a “Merry” Christmas what we are really wishing is that the person receives all of the gifts that accompany festivity—namely renewal, transformation, and rebirth. Why should we expect someone who has not experienced the real Christmas gift to wish someone else to have an experience of it? 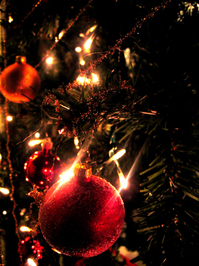 It was mentioned above that the secular Christmas was mostly a conglomeration of various religious festivities. This means that we can preach the Gospel of Christmas by preaching the inner meaning of these customs. In his book, The Blessings of Christmas, Pope Benedict XVI mentions a few of them.

Christmas itself is not just a single day, but twelve—one for each of the tribes of Israel until Christ’s full manifestation to all the nations on Epiphany. Celebrate all twelve instead, especially in thanksgiving for His coming to the Gentiles. May all of our actions in the coming days, preach to the world, the true light that has come into the world!