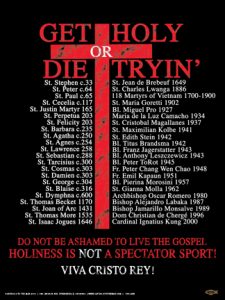 Order Poster at Catholic To The Max

When I was in my teens, I overhead an older woman say that faith was for adults. From her perspective, sincere conviction was a process that unfolded over time. She believed it took maturity and life experience to develop virtue and a deep-rooted faith in Jesus Christ. Since, I wasn’t very mature or virtuous at the time, I took her words to heart. I settled for the conclusion that religion was for the senior crowd. Youth, I figured, just wanna have fun; and fun didn’t seem to foster faith.

Thankfully, I grew up and learned a thing or two along the way. Specifically, once I became a mother, I began reading saints’ stories to my children. Together, we learned about the many courageous men, women and children, who, by their love for Jesus and His Church, were inspired to strive for holiness throughout their lives.

We discovered real life heroes and heroines who didn’t wait to become holy. Instead, they dedicate the days of their youth to growing in their knowledge and love of, as well as service to, Jesus Christ.

One of my family’s all-time favorite young saints is St. Philomena. Several of my children have a devotion to her. They are members of The Universal Living Rosary Association which claims her as patroness.

This young, virgin saint was discovered quite by accident. While searching for the remains of Roman martyrs in the Catacomb of Priscilla, in 1802, her relics were found along with an earthenware slab that bore the name Filumena. Little was known about the 13 year old, but she was assumed to have been a martyr. Three years later, her relics were enshrined in an altar in the Diocese of Nola in Mugnano, Italy. 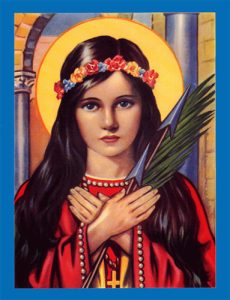 The life of this young heroine might have remained a mystery. But, I suppose, her example of courageous virtue was just too powerful to be lost. So, on August 3, 1833, the saint began revealing her story to Mother Maria Luisa de Gesù, the Foundress of the Oblates of Our Lady of Sorrows. The saint would continue to reveal details of her life to two more people. Each of the three recipients lived in a different area of the globe and they did not know one another.

Though Philomena was only a girl, she chose to dedicate herself to Christ rather than accept the proposal of the powerful Emperor Diocletian. That choice resulted in Philomena having to suffer from series of twisted methods of torture. From drowning to arrows to beheading, her persecutor refused to relent until he finally succeeded in delivering her into eternity on August 10.

Not long after her relics and story were made known, miracles began to be attributed to the intercession of St. Philomena. French woman, Pauline Jaricot was close to death, suffering from incurable heart disease. Doctors offered her no hope of survival. So, she turned to the youthful saint as her last resort. Then on the feast of St. Philomena, August 10th, 1835, Ms. Jaricot’s prayers were answered. After receiving our Lord in the Eucharist, the woman was suddenly and completely restored to good health.

To date, countless miracles are attributed to the intercession of St. Philomena. In fact, my own son, who happens to have been born on her feast day, recovered from a severe burn to his arm after we prayed for her help. Though it isn’t a registered miracle, we credit the saint with the fact that he not only healed quickly, but he has no scarring whatsoever.

Owing to poverty, the Goretti family shared a house with Signor Serenelli and his young son Alessandro. The family worked very hard just to meet their basic needs. Unfortunately, Luigi Goretti contracted malaria and died, leaving his wife and children to fend for themselves.

Maria dutifully took up her chores and assisted with the other children. She showed remarkable maturity and holiness even though she wasn’t even 12 years old. Her First Holy Communion was a much anticipated event in her short life.

Not long after, their young housemate, Alessandro became obsessed with impure reading and attempted on several occasions to incite Maria into sin with him. She refused. However, on July 5, 1902, he tried again to rape the 11 year old. When she resisted, crying out, “No! It is a sin! God does not want it!” he stabbed her 14 times.

A Final Act of Charity

Every attempt was made to save the girl’s life, but it was not enough. She suffered for nearly a day before dying from her injuries. During those painful hours, Maria offered forgiveness to her murderer and even prayed for him.

Maria’s final act of forgiveness and prayer deeply effected Alessandro. He repented and was converted. Both Mrs. Goretti and Alessandro Serenelli were in attendance on June 24, 1950 when she was declared a saint and martyr.

Much debate has surrounded the story of this saint. Some argue that Maria died trying to save her virginity. Others argue that she died in order to prevent Alessandro from sinning. Either way, Maria Goretti’s heart was not bound to earthly treasures, but to a desire for eternal salvation for others as well as herself. 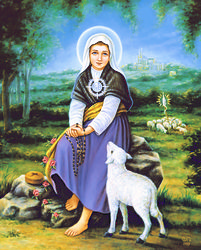 This dear young girl could have been the inspiration for the story of Cinderella. Born with a deformed hand and scrofula, a form of  tuberculosis, young Germaine lost her mother while she was still an infant. Her father remarried soon after, but her stepmother made it her mission to bring misery upon the child. She insisted that Germaine’s illness was a threat to her children and so convinced her husband to send the young girl outside of the home. She spent her childhood working as a shepherdess and was forced to sleep in the stable or garret on a bed of branches.

Yet, in spite of the injustice and abuse she faced, Germaine was well-known for her patience and humility. She went to extraordinary measures to hear the Holy Mass and she subsisted on bread and water. It is said that she would drop to her knees at the sound of the Angelus bell, even if she was crossing a stream.

Her father eventually came to his senses and stopped the abuse of Germaine. He invited her back into the home with the rest of the children, but she chose to remain in the stable. In 1601, she died on her bed of twigs at the tender age of 22 years old.

Germaine’s body was found to be incorrupt in 1644 and in the years to follow many miracles were attributed to her intercession. Then, during the French Revolution, revolutionaries attempted to destroy the perfect remains.  They dumped the body into a pit under the sacristy and covered it with lime and water. However, not even two years under those conditions were enough to overpower God’s protection. After the Reign of Terror ended, her body was again exhumed and found to be still incorrupt.

Holiness is meant for everyone. There’s no age requirement when it comes to loving Jesus Christ. He invites us all, young, old and in-between, to draw close to His Sacred Heart. Perhaps, it is time that we revisit that invitation. Instead of promoting the belief that youth and deep faith are incompatible, we need to draw from the example of so many young people who understood that Christ, alone, is the Source of all genuine happiness.

Be on the lookout for my next post “Get Holy or Die Tryin’, 3 Male Saints Under 25.”