In July of 1917, the Blessed Mother appeared for a third time to three shepherd children in the mountains of Fatima, Portugal. Just as in her previous appearances, the beautiful Lady of Fatima came in peace. However, during this third apparition, she wished to stress the very real consequence of sin by showing the children a terrifying vision of hell.

The Vision of Hell

Our Lady showed us a great sea of fire, which seemed to be under the earth. Plunged in this fire were demons and souls, in human form, like transparent burning embers, all blackened or burnished bronze, floating about in this conflagration in clouds of smoke, lifted by flames coming out of their bodies. They rose and fell on all sides, like sparks in roaring fires, without weight or direction, amid shrieks and groans of pain and despair that terrified us and made us tremble with fear. The demons could be distinguished by their terrifying and repellent likeness to frightful and unknown animals, black and transparent like burning coals. 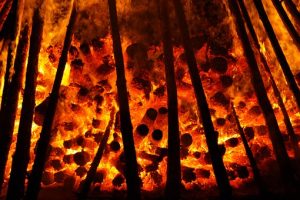 According to Lucia, the oldest of the visionaries, the sight of hell was so horrifying that she would have died of fright had the Blessed Mother not promised to eventually bring the children to heaven. But along with this warning, Our Lady of Fatima also made reference to a plan for reparation.

I shall come to ask… that on the First Saturday of every month, Communions of reparation be made in atonement for the sins of the world.

Our Lady of Fatima’s Plan

Then, eight years later on December 10, 1925, Our Lady appeared again to Lucia, who was now studying under the direction of the Dorothean Sisters in Pontevedra, and offered further instructions for her plan.

See, my daughter, My Heart surrounded with thorns with which ingrates pierce me at every moment with blasphemies and ingratitude. You, at least, make sure to console me and announce that all those who for five months, on the first Saturdays, go to confession, receive Communion, say five decades of the Rosary and keep me company for 15 minutes meditating on the mysteries of the Rosary, with the purpose of making reparation to Me, I promise to assist them at the hour of death with all the graces necessary for the salvation of their souls. 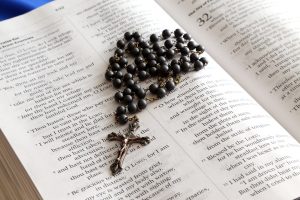 Since, as Catholics, we are typically in the habit of praying novenas which consist of nine days, weeks or months, there was a question as to why Our Lady would only request five Saturdays to fulfill this devotion. Lucia answered this question in a letter in 1930. She said each Saturday corresponds to the five principle offenses against the Holy Mother.

By following Our Lady’s plan, the faithful make reparation for the blasphemies against Mary’s Immaculate Conception, her perpetual virginity and her divine maternity, as well as, atone for direct insults toward her images and for those who promote hatred or indifference toward Mary in the hearts of her children.

Not Much Has Changed

In the 100 years since our Lady appeared to the children of Fatima, such grievous offenses against the Blessed Mother have only increased in the world. Whether it be the Protestant refusal to recognize her sinless nature or the indifference of Catholics who fail to pray the rosary, the Mother of God continues to suffer the insults of her children.

Many seem to have forgotten, the real (and terrifying) consequence of hell still looms for unrepentant sinners. But just as Our Lady of Fatima promised to aid the poor shepherd children, she also continues to extend her invitation to you and me today.

How to fulfill the Five First Saturdays Devotion

On the first Saturday of five CONSECUTIVE months,

Do all of this with the intention of making reparation, specifically, for the blasphemies against and ingratitude toward the Immaculate Heart of Mary.

There are First Saturday Devotions in the Triangle area, find one nearest to you. Since parishes sometimes need to change Mass times, please be sure to call the parish directly to confirm the Mass times.

Does your parish promote the Five First Saturdays Devotion? If so, please share that information so that we can add it to the website calendar.

Consider inviting a friend or family member to practice this devotion with you. Console the heart of the Immaculate by sharing Our Lady’s message with others.